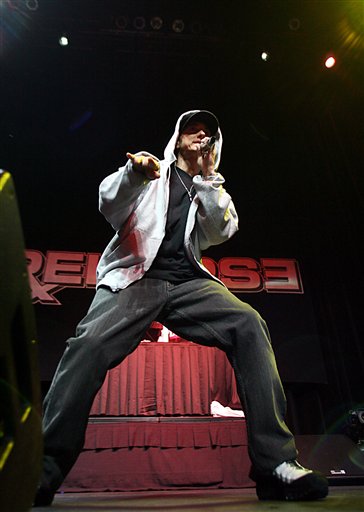 Eminem rcoked the 1,500 sound board theatre in Detroit yesterday while his new cd “Relapse” came out as well.

Em did an 8 song set for free with a mass amount of the tickets given out with hints and locations thru his twitter account.  I guess you could call it the Twicket giveaway.  From tickets found in shoes close to 8 Mile or meeting Paul at the Waffle House.  (Die hard Eminem fans will know who Paul is.) It was an interesting giveaway ala Nick & Norah’s Infinite Playlist” but instead of looking where they would perform, you had to find where tickets would be.

Also, an update on the release date of “Relapse 2” for those that missed it.  I spoke with someone from Interscope Records yesterday and they advised that Eminem’s “Relapse 2” will be released in the 4th quarter, which would mean a November or December release date.

Will Eminem knock Green Day from the number 1 spot next week?  No need to go thru brain damage, we will know soon enough. Don’t forget Eminem will be on Jimmy Kimmel this Friday.-Dr.FB