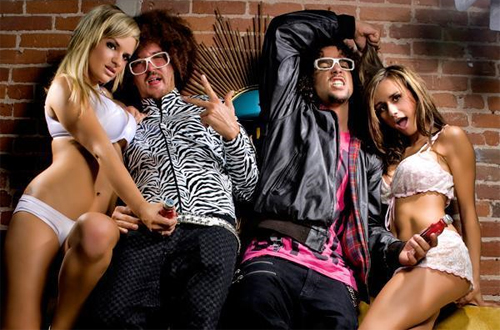 Let’s hope if they win, they do not accept it the awards in the mankini’s.

LMFAO is nominated for 2 American Music Awards. They are nominated for “New Artist Of The Year” and For Favorite Band, Duo, Or Group for the award show.

Interesting to see them nominated for “New Artist Of The Year” as this is their 2nd album and they have made mixes from everyone to Kesha, who they toured with, and Lady Gaga.

They have 2 songs in the top 10 right now with “Sorry For Party Rocking” and “Sexy & Know It” which the video has too much mankini kawk.

Fans can go to online to vote at amavote.com or ama.abc.com. The 39th Annual American Music Awards will be broadcast live on ABC on November 20 from the Nokia Theatre in Los Angeles.-DocFB