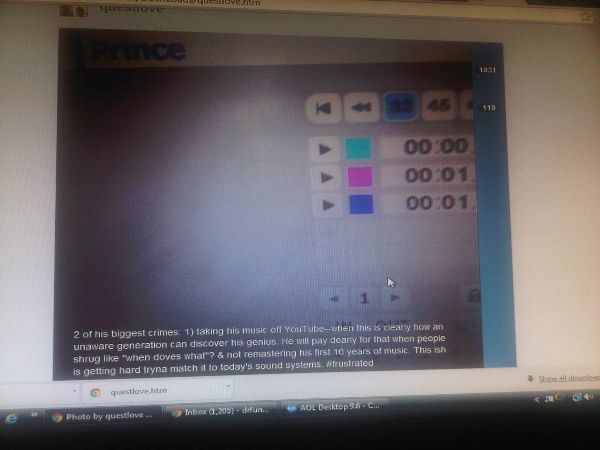 Questlove took to Instagram, taking a photo of a DJ program where if you look to the top left is Prince’s name and we can only assume that Quest was adjusting level’s of Prince’s early material which has not been remastered and several top not DJ’s such as Quest have made their own type of remaster’s when it comes to the purple one’s work.

For more of what Questlove had to say about Prince, click the continue reading button….

Quest was not done there.  He made this comment;

2 of his biggest crimes: 1) taking his music off YouTube–when this is clearly how an unaware generation can discover his genius. He will pay dearly for that when people shrug like “when doves what”? & not remastering his first 10 years of music. This ish is getting hard tryna match it to today’s sound systems. #frustrated

Now, we joked yesterday how we could not find a Prince video on youtube yesterday to go with a story but it is not a joke.  Prince has NO official Youtube account and his video’s are disappearing again.  2 weeks ago, a video I posted of Prince and Whitney Houston together was taken down although in the past, his people were made aware of the video.  It was used after Whitney’s passing as a tribute to her. 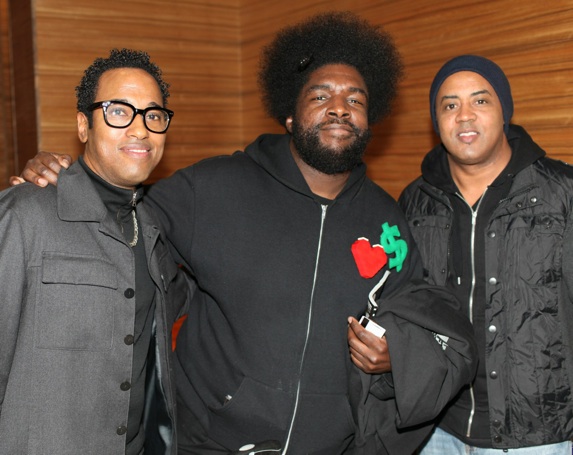 Quest brings up a point that many fans of Prince’s early work are frustrated with; no remaster’s.  It would be frustrating without fan-made mastered versions such as “Controversy” “If Was Your Girlfriend” and “When Doves Cry” to name a few.  Quest is right though as the younger generation is more and more finding out about music through Youtube.

YouTube right now is the *NUMBER ONE* place kids listen to music now.

When WE had a chance to talk to Prince about Youtube and his masters, it was something that he has put thought into.

We are not going to share that just yet but will say we agree with Questlove on this. It is something that Prince is set on.

We wish we could talk to Quest about this but sometime around the New York “Welcome 2 America” shows, we were blocked.  Not sure why but because of it, anytime he has something to say about Prince or anything cool, unless someone retweets it, we NEVER see it, which TOTALLY sucks!

It would be great to have a Blu-Ray release of all his videos and an official Youtube channel.

What do you think of what Questlove said?-DocFB