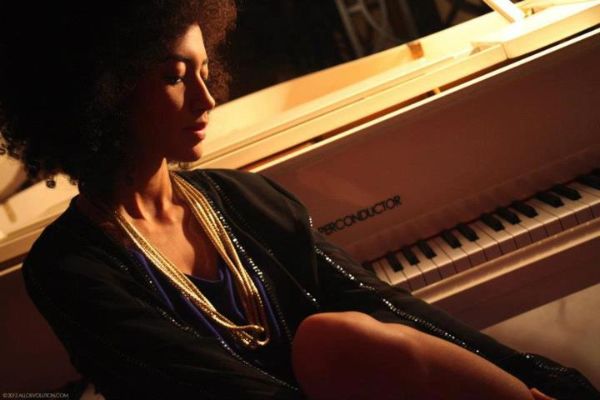 Ledisi took to her Facebook page today to tell her about hanging with Prince and him introducing the music of Andy Allo to her.

Ledisi seemed impressed what she heard as we did a couple of months ago.

For what Ledisi had to say about Andy and the release date of “Superconductor”, click on the continue reading button below.

So…. last weekend I hung out (with) my friend Prince and he introduced me to the beautiful songbird, Andy Allo.

I had the honor of hearing songs from her new album “Superconductor” produced by Prince. After 8 bars of the first song, “People Pleaser” which features the legendary Maceo Parker and my New Orleans brother Trombone Shorty, I realized I had stopped breathing for a minute.(laughing) That track was so funky my neck hurt afterwards from bobbing so hard.

As I listened to more songs it began to hit me that I could not take this home and I began to beg for an advance copy.(laughing)Nothing worked so I have to wait like everyone else.

Andy’s songwriting is refreshing and so needed in music. Her voice sweet, sultry with an edge. Vocally she does just enough gently gliding through melodies and her lyrics say it all. Her heart is all over her guitar.

I can hear where Prince enhanced what’s already there.This collaboration is divine. The musicianship on this project reminds me why I fell in love with music.

We cannot agree more with Ledisi.  This is NOT your typical Prince protege record.  I dig her quote about the musicianship on the record reminding her why she fell in LOVE with music.

We always heard the record was coming in September and now we know the date.  September 20th, 2012 to be exact.

Andy told us what she had in mind for how pre-orders for the album could be made and distributed, but since that was a couple of months ago, we are not sure if that is the way she is going to go.

So, “Superconductor” September 20th.  Sure we will have LOTS more news before then. Stay tuned.-DocFB