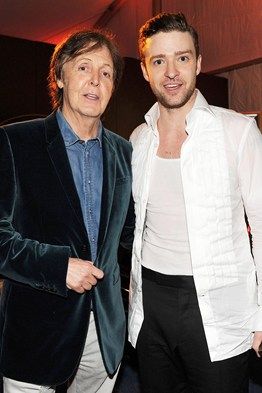 The late night wars are heating up as Jimmy Kimmel has booked Paul McCartney and Justin Timberlake back to back to be on his show next week.

Both concerts will shut down Hollywood Boulevard with McCartney’s show being on Monday, September 23rd and then Timberlake will follow with a performance on Tuesday, September 24th.

McCartney and Timberlake will both do sit-down interviews with Kimmel before performing for what should be record-breaking crowds.

Timberlake will be doing double duty as he was announced by Jimmy Fallon to be on every Tuesday of September which Fallon called #TimberlakeTuesdays.

McCartney has a new album entitled “New” due On October 15th. Timberlake”s new album “The 20/20 Experience, 2 of 2” is due on September 30th.-DocFB

Diagnosis: Arsenio was able to snag Kendrick Lamar for tonight, but leads off with Dr. Phil tomorrow. Shoulda got this Dr. instead…