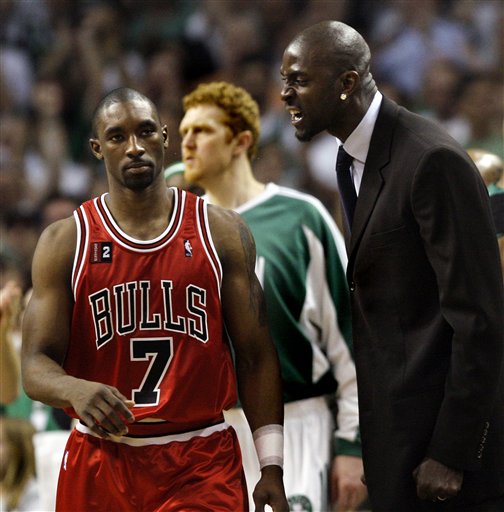 Ben Gordon Gets An Earful From Garnett. Photo: AP/Elise Amendola

I did say that the Mavs would beat San Antonio.  I just did not know they would dismantle them.  Denver laying the smackdown on the Hornets by 58. The Hornets say it’s just one game.  True, but only one team won a series after getting beat that bad.  They got beat so bad, Chris Brown took credit for it.

These playoffs have been exciting by teams thinking they could sleep walk thru a series.  Yes, Orlando and Miami, I am talking about you.  Orlando will & has recovered, Miami will not.  Houston is about to eliminate Portland and move out of the first round without you know who, who can’t get out of a first round.

The most exciting series hands down has been the Boston Celtics versus the Chicago Bulls.  3 over times in 3 games?  Seriously?  Another one last night that went the Celtics way with Ray Allen fouled out, Garnett in street clothes and Powe out for the season.  This series was the most exciting.  The Bulls may force a game 7 with a win on Thursday, but you are not beating Boston in a game 7 at the Garden.  Not. Gonna. Happen.  Not even Jordan did it.

As the Lakers and Cavs sit and wait, I will make this second round prediction; The Mavs will beat the Nuggets in the 2nd round to face the Lakers after L.A. knocks off the Rockets.  Take it to Vegas baby.-Dr.FB