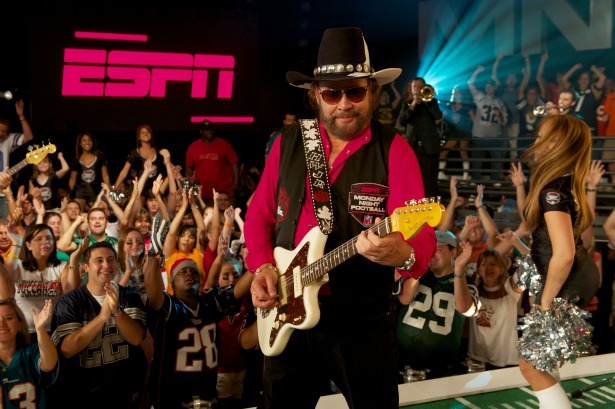 If you like hearing the “Monday Night Football” song before the game on Monday night, you might have to watch it on youtube from now on.

For the first time in 20 years, the “Monday Night Football” theme song will not air before the Monday Night game, ESPN announced.

Hank Williams appeared on “Fox & Friends” Monday (That was his first mistake) and he got political.  Hank Williams backed McCain and Palin in 2008.

He commented on John Boehner playing golf with Obama is like Netanyahu (Israeli Prime Minister) and Hitler.

Fox surprisingly distanced themselves from his comment and said they did not understand the comment.    Williams said “I’m glad you do not understand.  They are the enemy.”  Fox then asked who is the enemy and without hesitation Williams stated “Obama and Biden.  The 3 Stooges.”  Guess Williams can’t count, can he?

After an outcry on social media sites, ESPN quickly responded with a statement;

“While Hank Williams, Jr. is not an ESPN employee, we recognize that he is closely linked to our company through the open to Monday Night Football. We are extremely disappointed with his comments, and as a result we have decided to pull the open from tonight’s telecast.”

This is not going to go away.  I will be surprised if ESPN uses the song for the rest of the year or ever again.  I’m all about freedom of speech but comparing someone to Hitler, is straight up lame.

We wonder who ESPN will turn to when it comes to recording a new song?  Why do I have a feeling they are already calling Justin Timberlake?-DocFB

Diagnosis:  I’m Still Ready For Some Football….Just Hold The Hank!