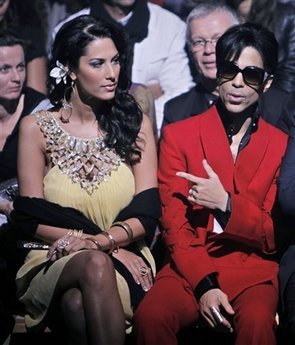 He kind of has that look in this photo of “She’s The DJ, I’m The Rapper” but then again that was from the Artist Formerly Known As The Fresh Prince and our Prince is still taking names and making lists.

We hear through our unofficial connections that Prince is slated to be on the Canal+ Television show on October 14th.  This is Prince’s first appearance since that Youtube agreement I reported on a month ago. So, hmm, will we be able to see that performance in the U.S.?  You know I am going to try.

As for his upcoming concert appearances, here is what I know and have heard; (Will leave out other things and just stick to what is supposed to go down)

Prince will play two shows at the Grand Palais exhibition hall in Paris on Sunday, October 11. The concerts are called “All Day/All Night” and will be held at 5 p.m. and 10 p.m. (tentative and could be changed.)

The tix will be sold today on the internet and tomorrow, the 9th, at FNAC stores for the concerts on Sunday. Both shows are open to the public. Ticket prices are 100 Euros for G.A. and 130 euros for VIP.

Here is a link for TICKETS, but if anyone has a better more clear link, just let me know and I will update the information. They are scheduled to go on sale 2 P.M., the time in Paris.

UPDATE:  I am hearing tix will now be on sale on the web site and store tomorrow October 9th. Tix prices could be higher as well and that could have played into the delay. There will be a 2 ticket limit.  As soon as more information becomes available, I will let you know.

Listen, you guys know I dig Prince, and I wish you guys good luck and hope everyone can look out for each other here. He is the ultimate musician, performer, everything, and in the end, it will be all worth it.

You know I have a special place in my black heart for all you Paris people and all of you overseas!

Prince, kick that french bootay and I hope everyone gets to go!-Dr.FB