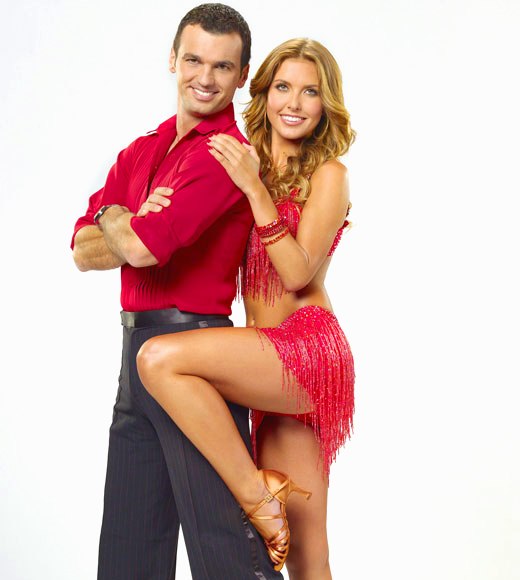 “Story Night” was the theme on tonight’s Dancing with Stars and with the dramatic exit of Michael Bolton last week, tonight’s show lacked the drama but made for some interesting and not so interesting dance routines.
Up first was the front runner Jennifer Grey. Surprisingly she was a little out of sync at times, but she is so damn like-able that you can for sure over look those little fumbles. She and her partner Derek Hough did a “student has a crush on the teacher routine”. It was cute, but honestly, it wasn’t really memorable to me. I think she really should have sexed it up with a sexier outfit or something…it just lacked the excitement we have been used to from her. But she managed to score a 24 out of 30, so good for her!

Next up Mrs. Brady, Florence Henderson. She danced the waltz. It may be just me, but I get nervous when contestant of a “certain age” does those high energy, very technical dances. So needless to say, I was looking forward to her more laid back routine. Well, It was simple and safe and that won’t win you the competition. But it was a good attempt at a romantic waltz that they needed to express…however, the story line was a bit dull. Really not much to say here, but check out the dance for yourself and you will know what I mean.
Kurt Warner and his partner Anna (won’t attempt to write her last name) danced a “singing in the rain” routine. Can I just keep saying how much I like Kurt Warner!!! Never thought I would say those words, but wow is he so charming and handsome. Their routine was cute, fun and actually was telling a story with an umbrella used as a prop during their routine. I loved him and he surprising didn’t look awkward at all. The judges scored him a 23 out of 30, which I thought was a little low. The crowd gave them a standing ovation as it was well deserved!

The train-wreck of the night was Margaret Cho. She and her partner Louie danced the Samba to “Copacabana”. I was looking forward to it as she came out wearing a rainbow patterned dress and feathered head piece. And umm, as Bruno perfectly stated, someone was drinking too much at the Copa Cabana. She looked lost at times, and awkward. There was hardly a story line to this…actually I have no idea what the story was! But I do look forward to her as she is so unpredictable. She scored her usual low: 18 out of 30.

Audrina and Tony slowed things down with a emotional story line…FINALLY a true story line. They danced really elegantly together. She was supposed to be the wife of a solider who was obviously no longer with us, guessing from the large amount of fake fog that Tony appeared from (i.e. heaven) Her biggest criticism was that she needed to point her toes, and so that earned a 26 out of 30. The highest score of the night.

Bristol and Mark. Ok. She is just not comfortable with dancing. Mark was supposed to be homeless and she was supposed to be a “high class” lady who passes by and ignores him, until he does some weird solo dance (just watch you will see).  Do you all find it funny that as soon as the Sarah Palin made her appearance and left last week….the once kiss ass judges are now very critical of her. THANK GOD. Although she is not and never been in the entertainment business, that is not a pass for the next round. She looked emotionless and lost….well at least she’s consistent! She was given an 19 out of 30.

Brandy and Maskim danced the Samba. With the practice rehearsals that showed Maskim slapping Brandy’s ass…this was going to be an interesting dance. Their story was “The Bodyguard” so it started out with Brandy singing, a la Whitney Houston It was good start and it was actually entertaining till the end. However, the judges were a bit critical of Maksim. Regardless, they earned a 24 out of 30.
Kyle and Lacey slowed it down this week with the Fox Trot. I was a little nervous for him as I cannot see Kyle as a romantic guy. Surprisingly, he did it. He danced with as much elegance as he could. He did really well and ended up getting a 23 out of 30. But it does prove he can entertain us whether fast or slow.

Situation and Karina danced the Fox Trot to “Boom, Boom Pow”…yes the Fox Trot. What a weird combination! And the story line was weird and then the dance ended up being weird. But it was entertainingly weird, bizarre and futuristic. This is something you have to see for yourselves. They earned a 20 out of 30 which was a surprise. But the Situation is trying…gotta give him a fist pump for that! (i know i know)

Last but not least is Rick Fox and Cheryl Burke. Boy, can he dance and be sexy and high energy at the same time! The height is officially not a problem. He is too damn cute and the choreography was amazing thanks to Cheryl Burke. The story line was quickly forgotten as Foxy’s shirt flew open. Although he is sexy, the boy got dancing skills. And that earned them a 24 out of 30.

Be sure to watch tomorrow’s result’s show to see the next booted couple. The Bolton will be back to sing so you can imagine what will take place between him and Bruno. Will he make Bruno apologize?  Just watch and find out…sure to be interesting! Keep it funky!