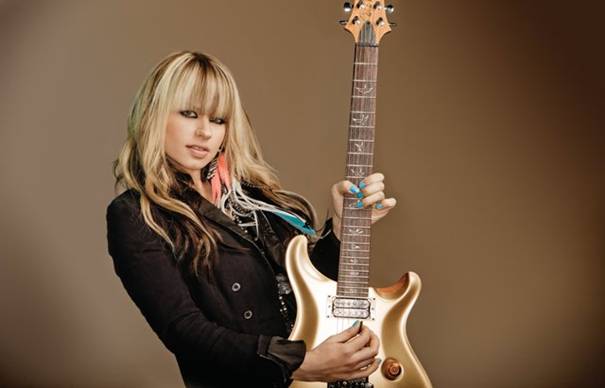 Orianthi will perform on this week’s American Idol this Wednesday March 17th.

We broke the news exclusively on Friday to our Twitter Followers and our Facebook Fan Page  as Fox did not want to make the official announcement  on the site til Monday, so we snuck to our followers because they didn’t say we couldn’t.  🙂

Orianthi will be performing “According To You” on the show, which is slowly creeping up the charts that used to matter, The Billboard Charts and is sitting at Number 17 right now.  She has been on Funkenberry Radio’s Top 21 for quite a while now.

When we interviewed Orianthi a few weeks back, she let us know that she recorded an updated version of “Stairway To Heaven” by led Zeppelin with Mary J. Blige and guitar God Steve Vai.

ALSO, Orianthi will be performing  on this Thursday’s “Tonight Show With Jay Leno” and that performance should be hot as well. Janet Jackson will be a guest on the show.  As you all should know, Orianthi was due to play with Janet’s brother, Michael Jackson (You might have heard of him) before his untimely death.  She is all over the documentary “This Is It” which is now out on DVD.

Hope you enjoy the great photo of Orianthi and be sure to check out her rocking performance on “American Idol” this week to see why we are raving about this girl.  “This Is NOT It” for her for sure…..-Dr.FB