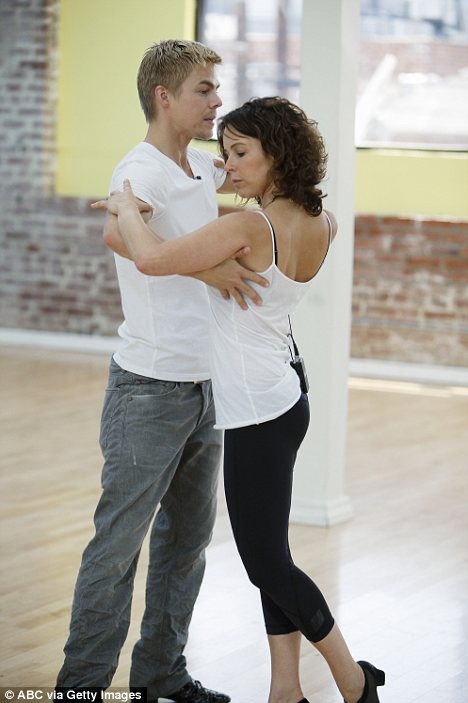 Nurse IV back with my review of DTWS…week 2….or shall I say WEAK 2
Coming off of the shock of the Hoff getting turbo boosted off the show, I was looking forward to tonight’s show.

Lets start off with the highly handsome Rick Fox and Cheryl Burke — They danced the Jive to the song “Tush”. I am sure the ladies wanted to see the Fox’s tush, instead, the 6’7 former Laker  gave us some impressive dance moves. The jive, being such a fast dance, Foxy didn’t miss a step! I was surprised by his energy and so were the judges, but they did criticize him somewhat…but being they were the first couple to perform…they got an underestimated 21 out of 30.

Next up Florence Henderson and Corky Ballas — They danced the second of the dance styles tonight; the quickstep, to “Suddenly I See” which seems a little ironic for a 76 year old (ouch I know). Florence did say she wanted to be a contender and she umm….lets say, she’s a trooper! She was a little lost as the quickstep is a difficult dance..it was a bit hard for her to keep up with this fast pace routine, but hey, she HAS to play the 76 yr old card…but the judges had little sympathy as they gave her a 19 out of a 30.

Brandy and Maks- They danced the jive to a song called, “Magic” well, I can make some clever pun, but her performance was so forgettable that I can’t even think of anything…. no, literally all I remember was hot pink lipstick, pig tails and a dance solo that made me look away…..but I guess you had to be there because I didn’t know what the judges saw as she and Maks got a 21 out of 30.

The trainwreck of the night was Michael Bolton and Chelsie Hightower —   Ok, if you haven’t seen the video clip of this, please I will pause just for you to see it………………………………………….Ok, for those who want to read on Mr. Bolton dance the quickstep to “Hound Dog” …Ok, let me set the stage: an actual doghouse, Michael Bolton in the dog house, then he is  lured out by a bone…..shall I go on?  This may sound like a bad dream, but it is not, it is the beginning of the worst dance routine I may I have seen on DTWS. It got worse, at one point it seems like he was going to stop in the middle of the routine and leave..and maybe he should have…Mr. Boneton, I mea, Bolton, received the lowest score in DTWS history…a “3” from judge Bruno! And a grand total of 12!!!!!!  He ironically has a song called “back on my feet again”….umm, you can take it from there…

Dancing after Michael Bolton is a dream come true for the worst dancer, so Audrina Patridge and Tony Dovolani lucked out. The most bored looking girl in the world, even when she is not, danced a pretty good quick step. Just good dancing, nothing else to say…..she looks like a doll, almost too stiff and very safe… I guess Tony said if they don’t get all “8’s” tonight he will be waxing his legs…hmmm, dumb bet, but bring on the hot wax as they scored a 23 out of 30.

My favorite and I think a lot of viewers favorite, Jennifer Grey danced the jive. She again brought the talent of last weak without the tear fest….she danced with high energy with her hyper as hell partner Derek Hough, they scored the highest of all dancers with a highly deserved 24 out of 30…something tells me we will be seeing her for a while.

After last week’s lucky as hell save from elimination, Margaret Cho and Louis Van Amstel danced the jive to a song called, “Dreaming”…I am still a bit bitter for the Hoff’s exit instead of Cho, but she did improve from last week. She looked lost at some points and her facial expressions bother me, but more importantly, she needs to improve her technique. Judges gave her an 18 out of 30. Thanks to Bolton, Cho will be saved again…

Kyle Massey and Lacey Schwimmer– danced the quickstep..I love this kid! The chub is still there as so is the talent. Although he needs to polish up the technique he entertains the viewer so much with his energy and smile…he just makes us feel chubtastic…oops I mean fantastic…he wanted some pizza, instead the judges gave him a delicious 22 out of 30.

Kurt Warner and Anna Trebunskaya danced the jive to “Danger Zone”. Although he looked like our fav drunk uncle (the handsome one) at a wedding, Kurt displayed some surprising dance skills. Good to see him let loose…decent performance….he is so likeable!! He got a respectable 21 out of 30

After being saved last week, The Situation and Karina Smirnoff were back, with enough rehearsal time to dance the quickstep to  “We No Speak Americano”. The Situation was all covered up and you know, I like him better like that! You could tell he was trying his hardest…he was counting, looking down to make sure his steps were correct…scary to say, I hope he improves but with a score like 18 out of 30, he may not get a chance…but like I said, thanks to Bolton, he, and Cho may be saved…that would be a great “situation”…I know, I know, I will stop.

We close the show with Bristol Palin…and mama Sarah. I would rather watch Michael Bolton for 24 hrs straight dancing than to watch any of the Palins. At one point, they showed the Palin’s house in Alaska…all I am going to say is thank god she didn’t get her hands on the walls of the White House. Bristol Palin and Mark Ballas danced the quickstep to “You Can’t Hurry Love”…oh god!  The song choices for her are sooooo obvious and ironic! First was” Mama told me not to come” and now it’s “You can’t hurry love”?? Think about it folks. Ok, her dancing was so bad and awkward, I am not sure how in the hell the judges keep giving her the high scores they have been giving her…….I’m sure it is for ratings but it is so obvious that they are treating her too kindly…a 22 out of a 30 was overly generous, once again!

Well, tune in tomorrow night for the elimination…I got my money on Bolton…but with last week’s shocking send off of the Hoff…you never know what will happen. Regardless, Seal will sing his new song, “Weight of My Mistake,” Tuesday night, and Janelle Monae will sing “Tightrope.”
Thanks and keep it funky!